Why we love Martin McKenna

A few years ago I was trawling the net looking for a suitable image for a fantasy book I was about to publish.  Fantasy covers are often difficult and it is unusual to find exactly what you want.  Commissioning work takes time and in this instance time was short.  The internet makes it very easy to communicate directly and if the recipient is a nice person they usually respond personally to any query.  Martin and I began what has become a long email friendship and despite not ultimately using the image I had found we discovered that there were a lot of projects that suited each other perfectly.

Martin McKenna has a very strong background in fantasy art and in particular horror art.  You can see his work here.  His skills are quite extraordinary - he works on so many different sorts of projects you might think that when I suggested he illustrate a cover for us he would laugh in my face.  An illustrator of Martin's calibre can command a hefty price for a single image - nothing we could match.  But Martin is such a lovely human being that he agreed.

He created the covers for Ian Irvine's series Grim and Grimmer and went on to create some utterly spectacular covers for Emily Rodda's series The Key to Rondo. 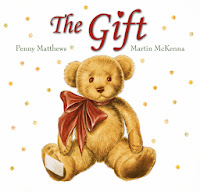 We loved working with Martin - he is so accommodating and generous and talented that working with him is very special.  It wasn't a big leap to go from covers to a picture book and the first opportunity we had was a book by Penny Matthews called The Gift.  That artwork was so beautiful we couldn't resist asking Martin if he would like to create a picture book of his own - he jumped at the chance and we were delighted to publish Octopuppy this year. 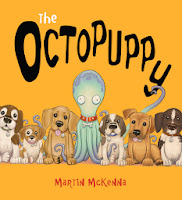 In this book we discovered a whole new layer of Martin's talent; not only can he can write, he can draw very different kinds of characters.  Jarvis in this story is a master of disguise.  Every time Martin sent us a new image for the endpapers we had a new favourite.  Celia's was, of course, Jarvis Who.  Mine was cross-dressed Jarvis as Dorothy from the Wizard of Oz. 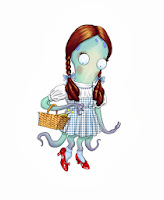 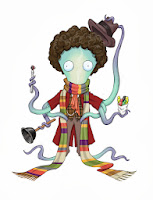 We are now embarked on  a new project with Martin - another spectacularly clever and delightfully funny idea which we hope to publish in May 2015.  Working in publishing we are always thinking years ahead - odd and unsettling at times because things seem so far away but we expect that the time will fly and meanwhile we will have Martin's gorgeous drawings to feed our imaginations.  If you haven't seen Octopuppy go and take a look in your favourite bookstore.
We were delighted to see a review of Octopuppy from Hill of Content bookstore that compared Martin's work to that of Oliver Jeffers.  We love Oliver Jeffers' work too (we would love to publish him so if he happens to read this blog please do get in touch) but we feel the two artists are unique.   There is room in the world for as many genius illustrators are there are children who love picture books.

A new series telling the stories of children emigrating to Australia